Replace a ho-hum wooden deck with a bigger, better, low maintenance structure that offers shade in the day, lights at night, room to entertain plus storage space. 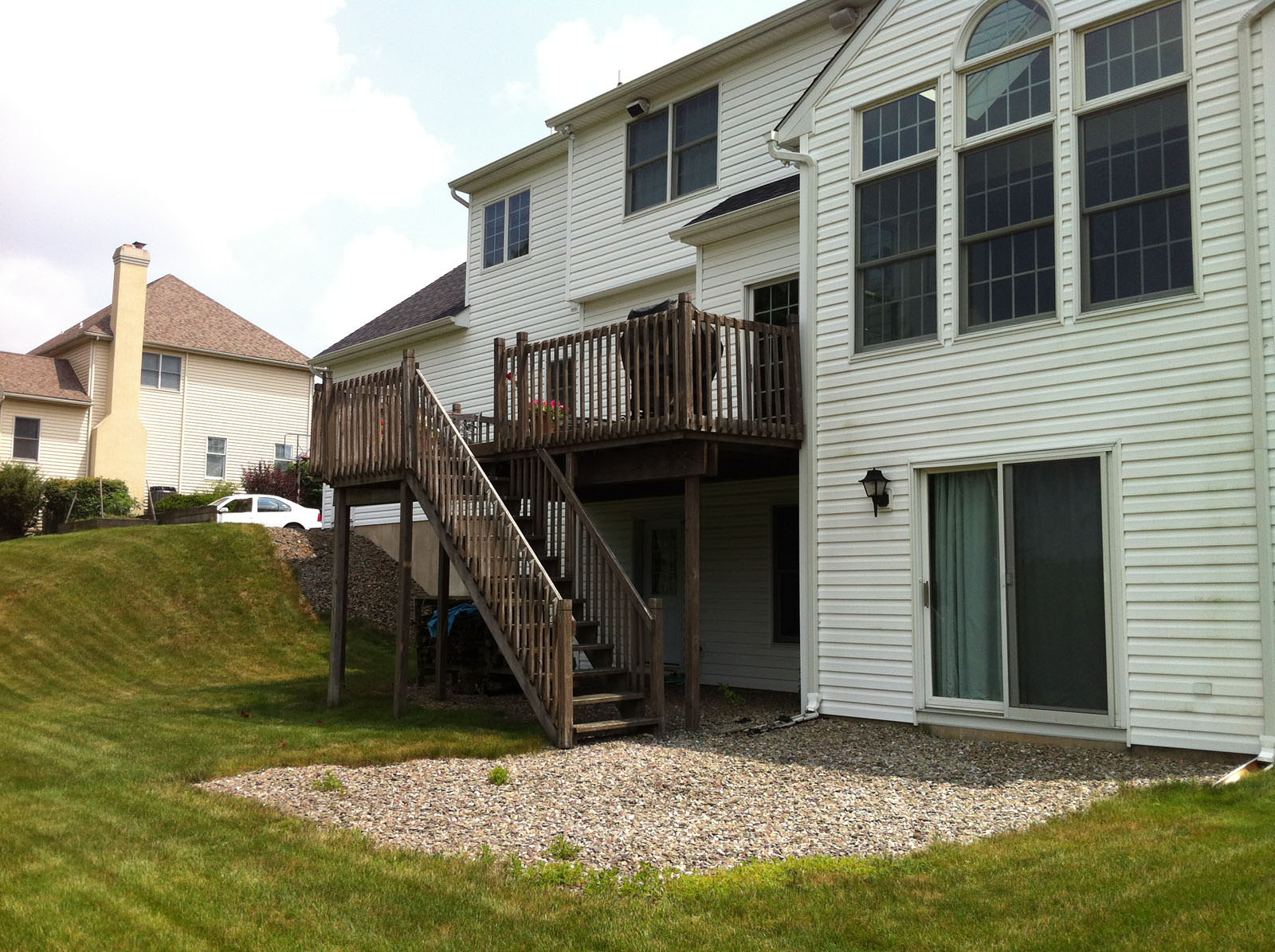 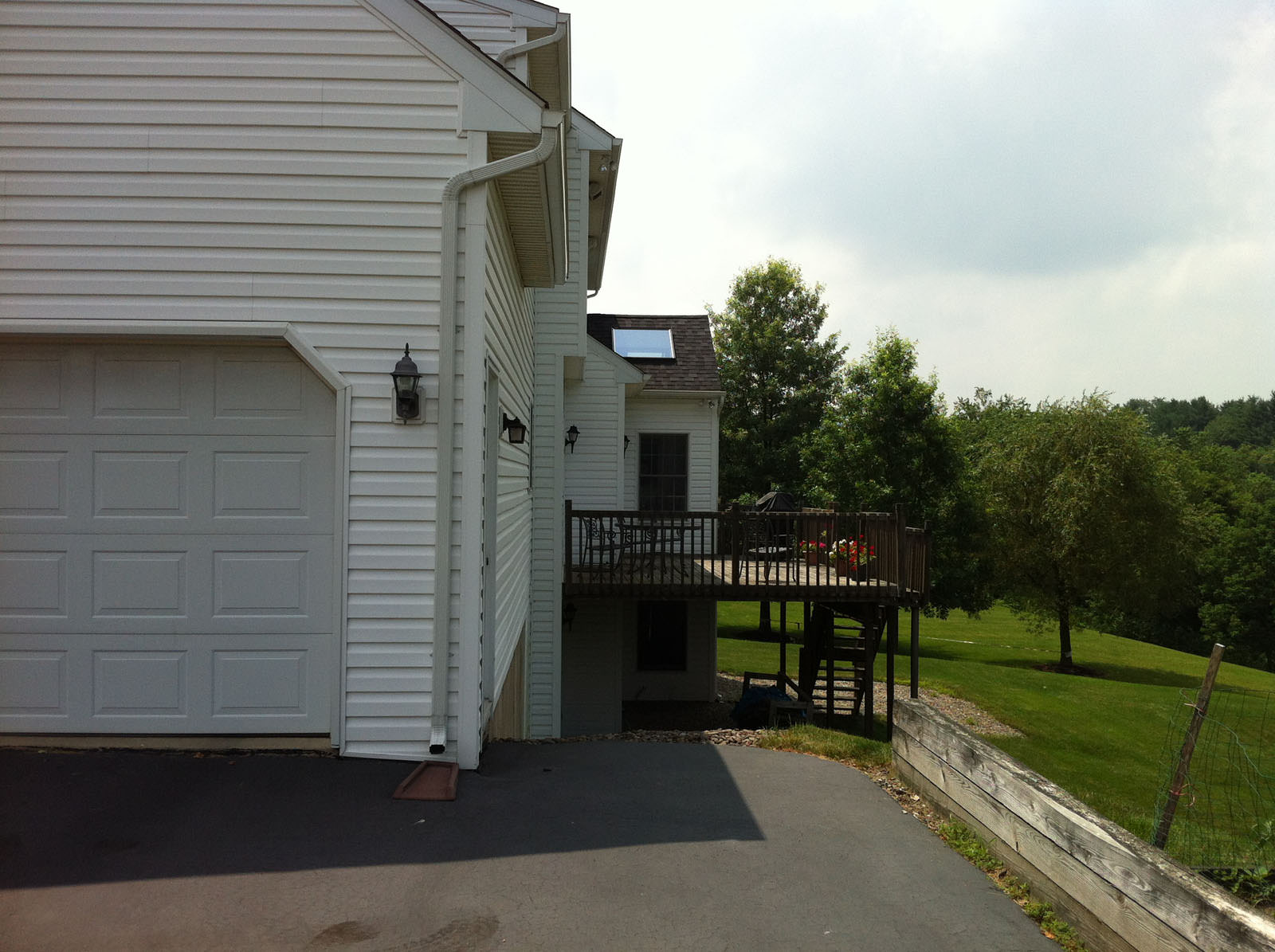 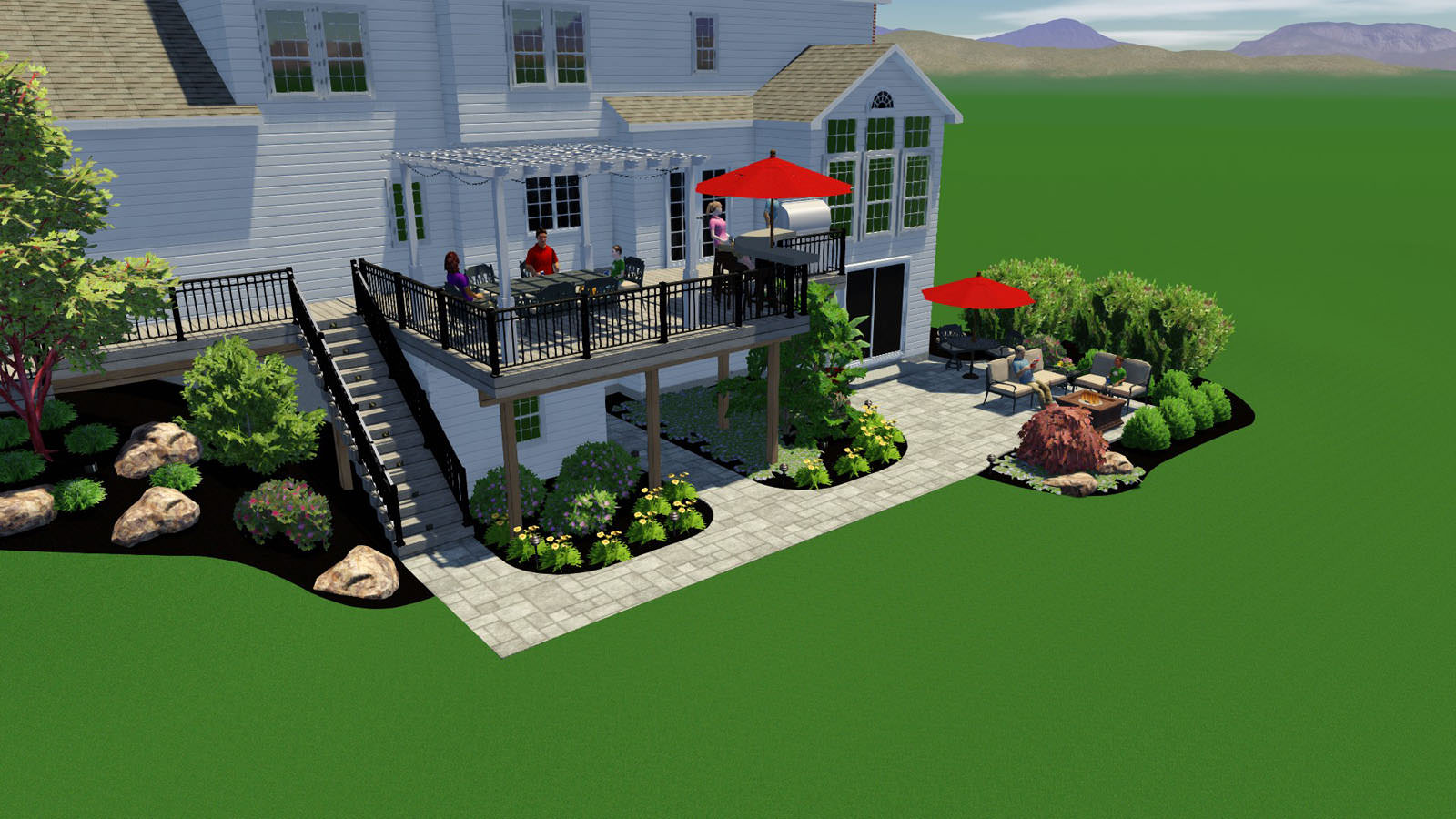 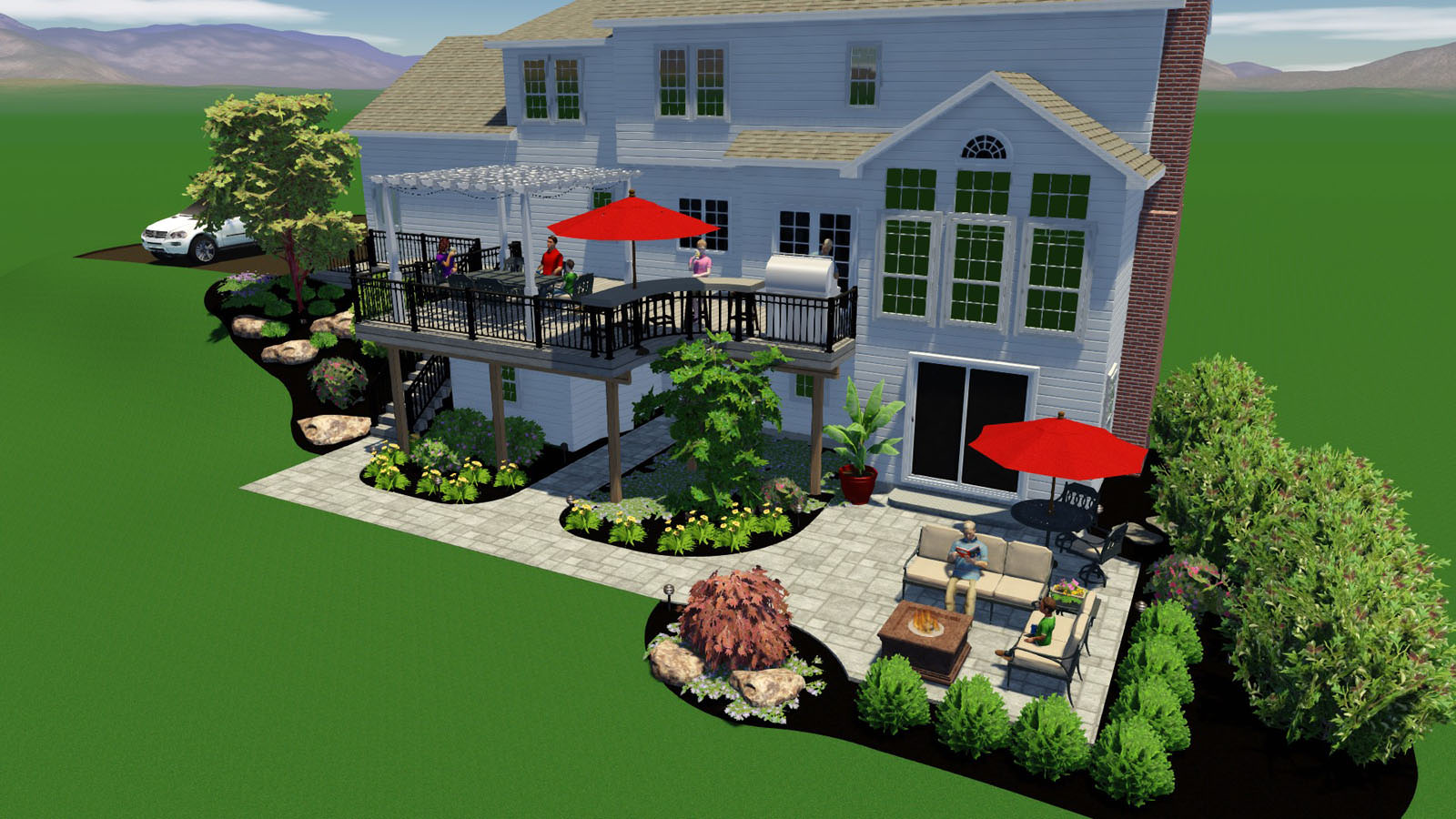 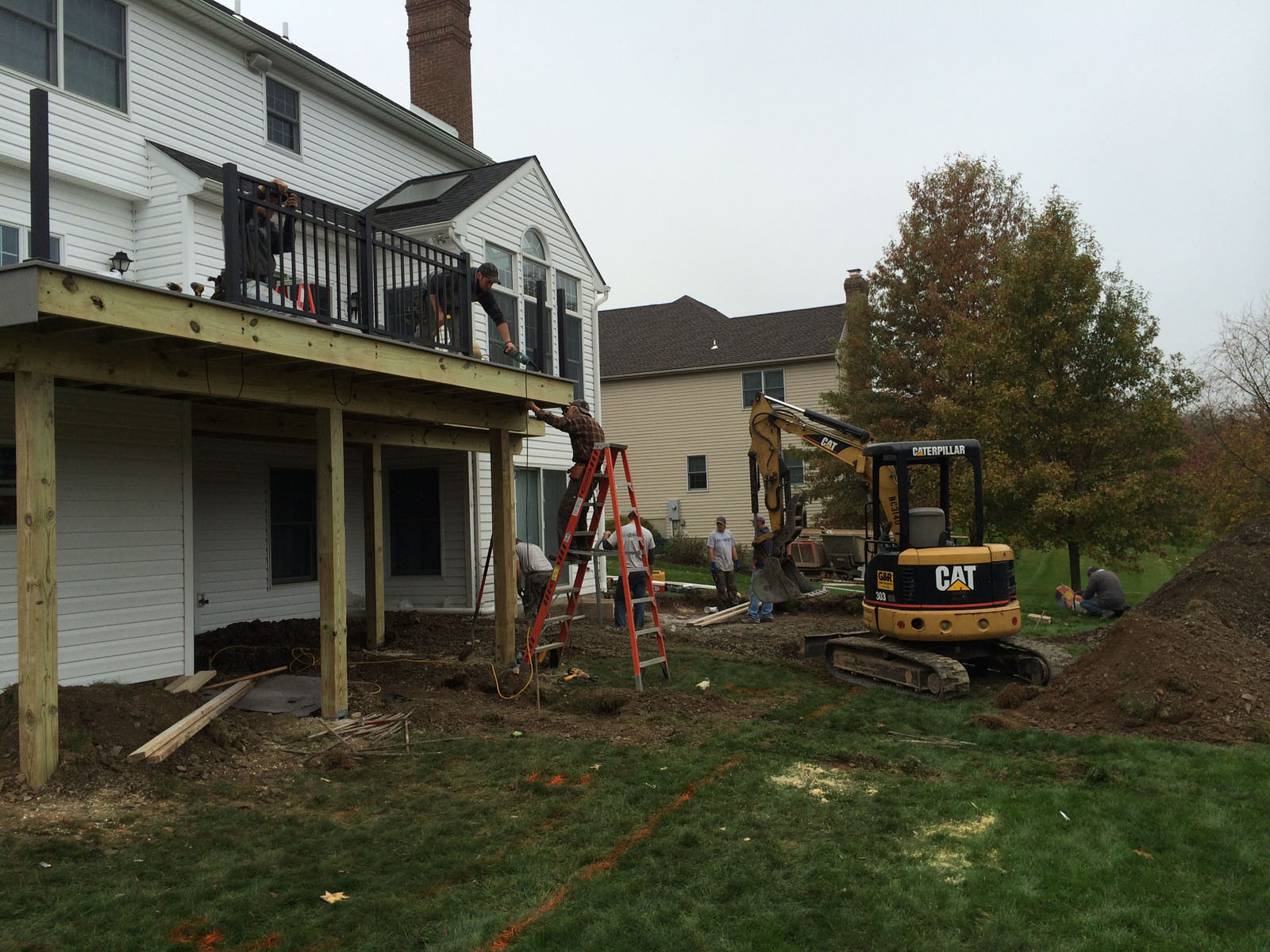 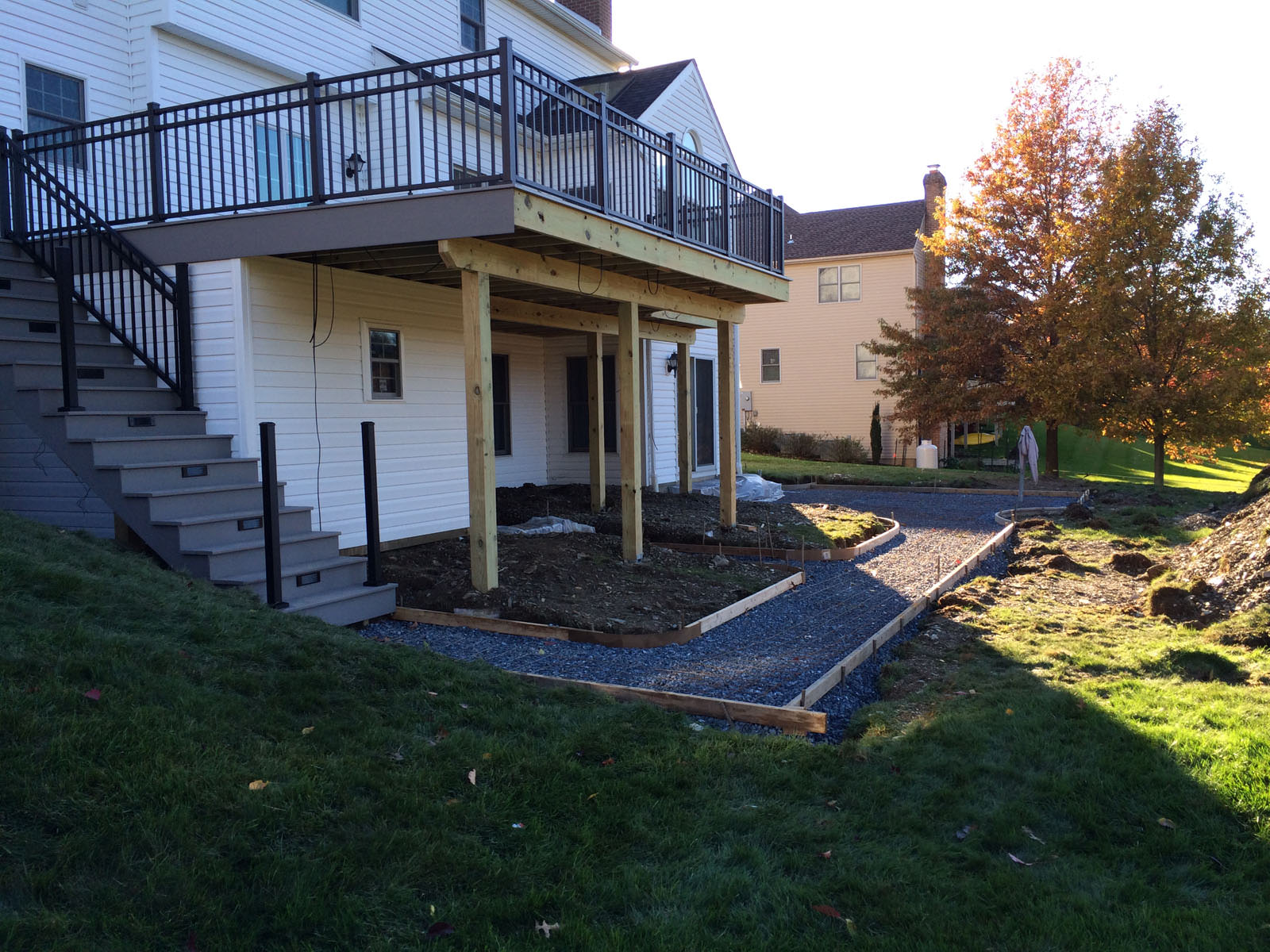 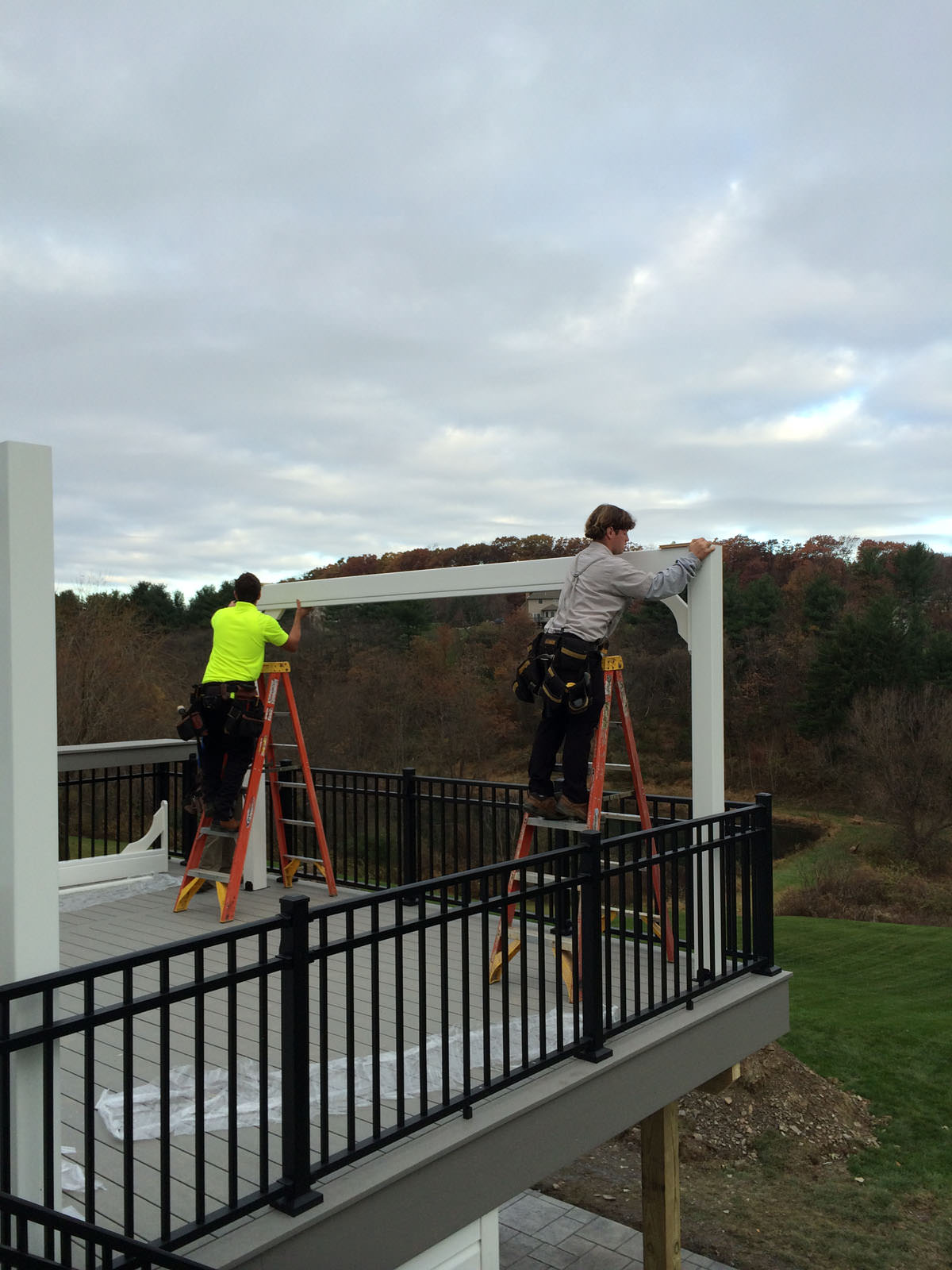 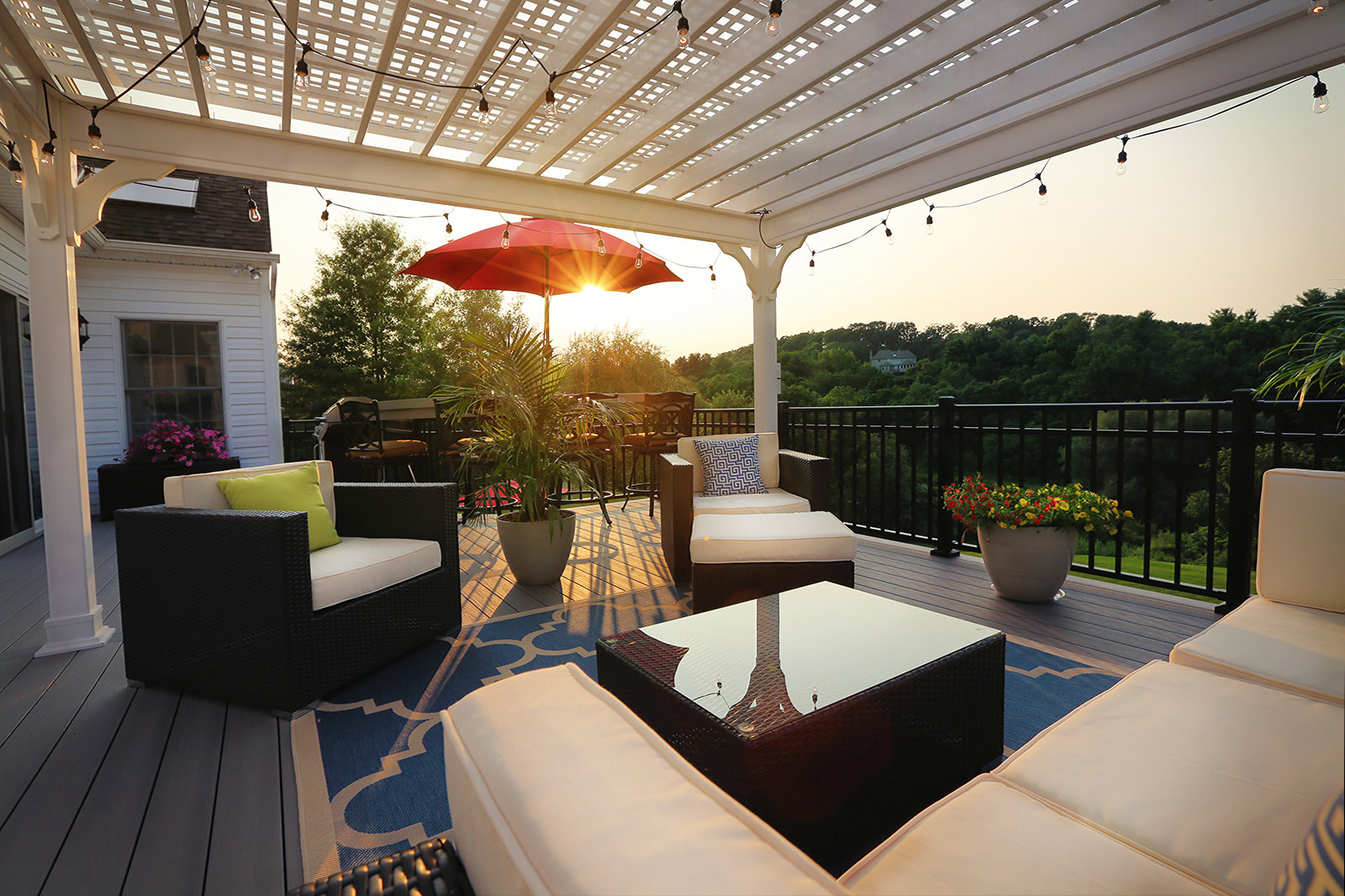 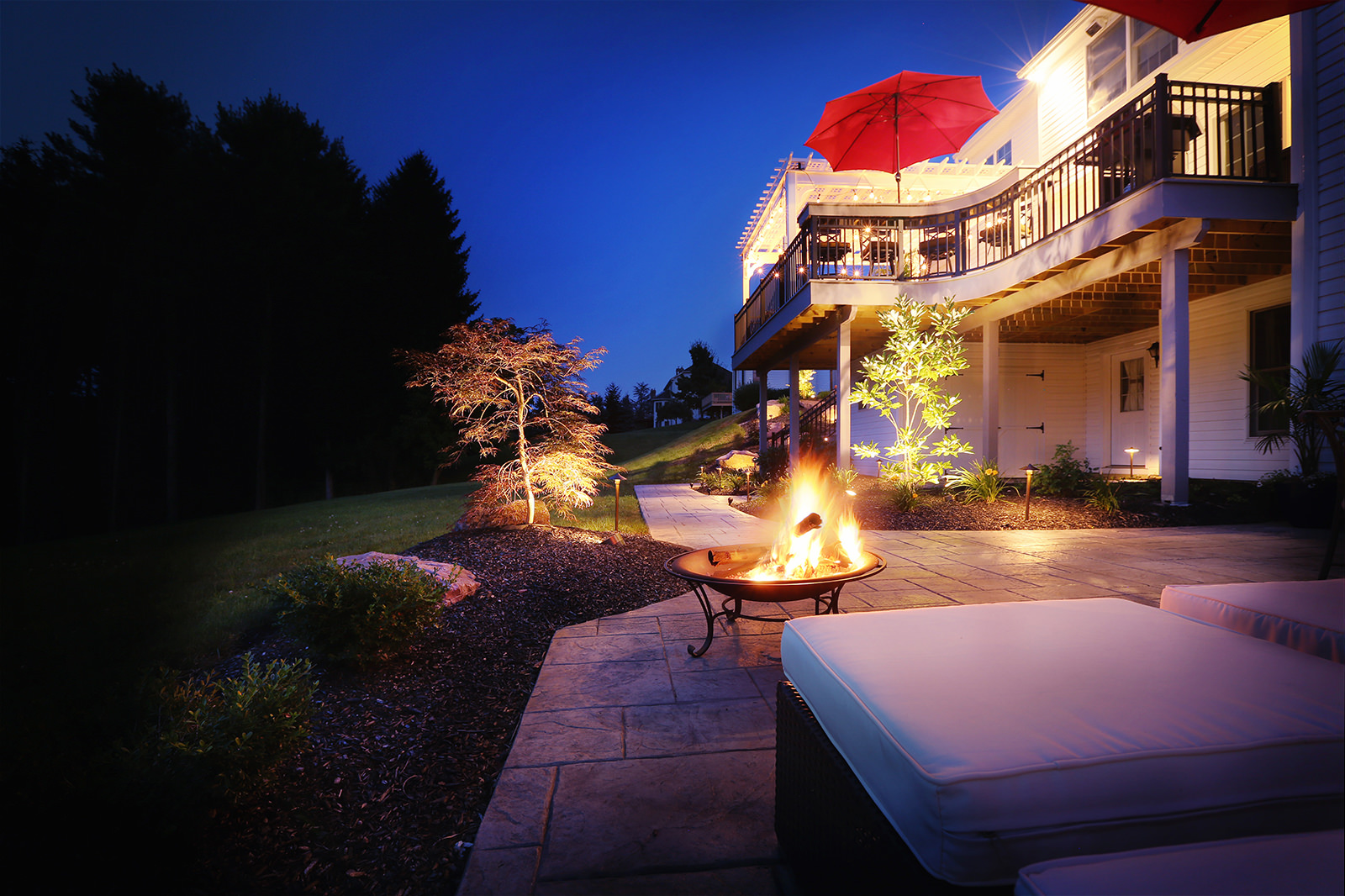 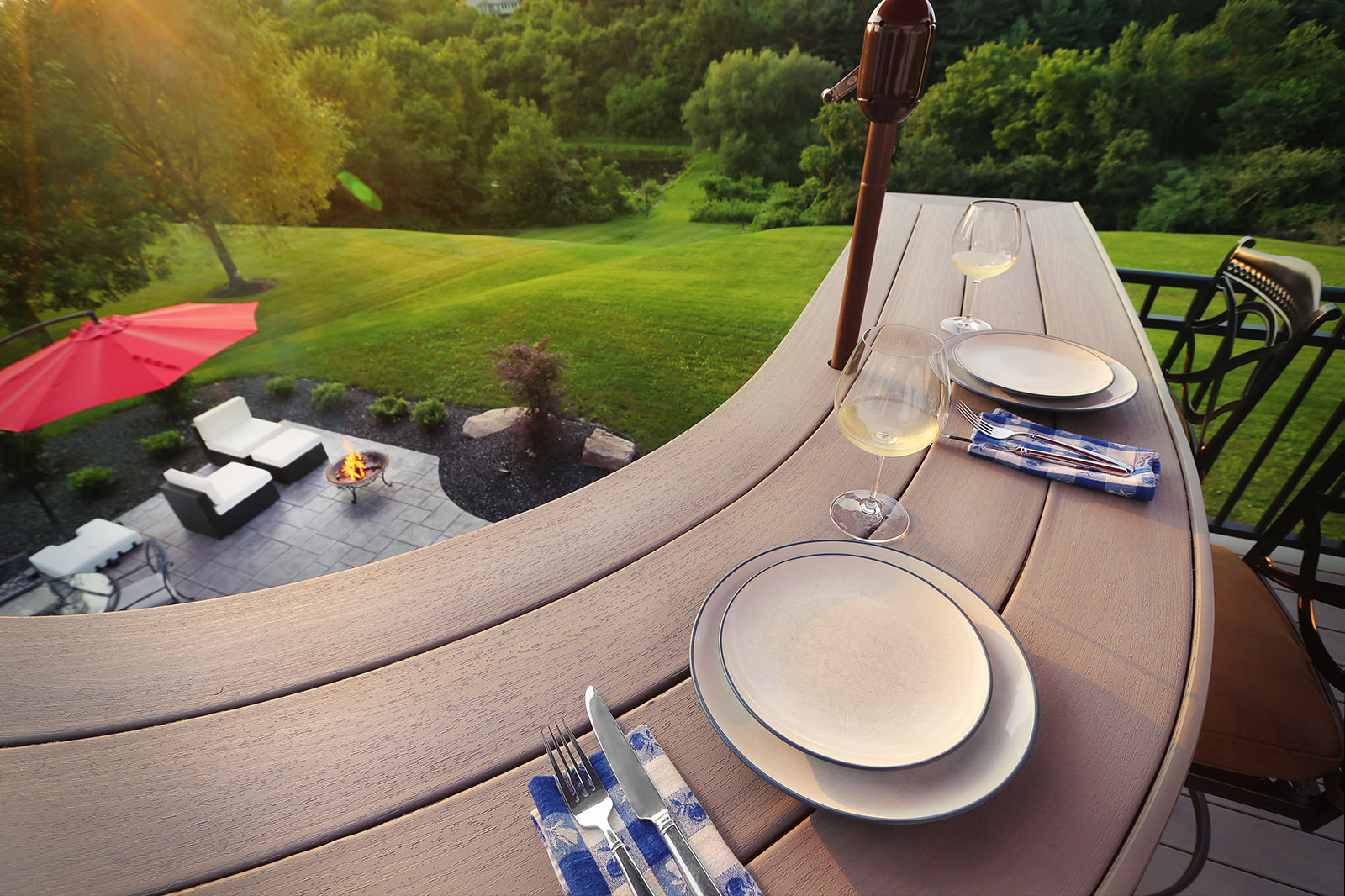 This project turned out amazing! I truly loved designing and building this project. The homeowners came to me to create a custom 3D design for them that would incorporate many of their needs into a compact, efficient design. They wanted to preserve the gorgeous view from the rear of the house while at the same time provided some much needed shade.

We started by removing the existing deck and designed a much larger space with a catwalk that linked the driveway at the side of the house to the rear deck. This allowed for easy movement between spaces. Our design featured an “open” plan with a gentle curve as an accent. We chose a PVC deck material by TimberTec for the low maintenance decking material. All decking was installed with invisible fasteners so the decking appears to be lying there. The railings are molded aluminum with a powder-coated finish for a lifetime of low maintenance. The almost invisible railing post LED light fixtures are designed to cast just a small amount of light along the edge of the decking spaces.

The deck area was also designed with storage in mind. We designed an under-deck storage space complete with a bright white waterproof ceiling, overall vinyl sided enclosure (to match the house), wide open access doors with decorative hinges and a window to give it a nicer look and natural light.

One special concern the homeowners had was that in the afternoon, the sun cooks the whole deck area. We addressed this by adding a decorative vinyl pergola with a lattice top to the dining area of the deck. This area will now be much cooler in the summer.

A curved bar/eating area was added to the deck to provide space for friends and family members to enjoy a meal while at the same time take in the beautiful sites of the surrounding vistas.

The patio was designed as a living room with room for an outdoor love seat and couch. A fire pit space was included for those cool spring and fall evenings.

The warm and inviting low voltage LED lighting was added around the patio and plantings to create a subtle ambiance of light for evening enjoyment.

"Working with Josh Gillow was probably the best experience we have had with a contractor. Josh was professional, responsive, reliable, creative and smart. The resulting deck, patio and landscaping exceeded our high expectations and will add significantly to the value and enjoyment of our home."

“Working with Josh Gillow was probably the best experience we have had with a contractor.

Josh was professional, responsive, reliable, creative and smart. The resulting deck, patio and landscaping exceeded our high expectations and will add significantly to the value and enjoyment of our home.

We have built two homes, so we have had significant experience working with builders and contractors. We hired Josh to build a deck and patio and do some landscaping in our backyard after getting plans from him and one other well-regarded landscaping firm. What impressed us about Josh’s plan was its creativity and the many ways it answered the needs we had communicated to him at our first meeting. He had obviously listened, and found a way to include the shade and privacy we needed, the entertainment space we wanted, and some storage space for which we hadn’t even thought about asking. Instead of the standard square deck and patio, he creatively incorporated curves and subtly defined spaces.

As the work progressed, his attention to even the smallest details became apparent, from the careful placement of lights and electrical outlets, to disguising the cap on the gas conduit embedded in the patio, to the inclusion of decorative hinges on the doors to the storage space. Josh was also completely dependable and responsive. We never had to call him to find out the status of the project. He always contacted us first with scheduling information, and he and his subcontractors always came on time (or earlier!) We could text him with questions at all hours and get a prompt and informative answer.

His subcontractors worked through all kinds of weather. It was so much fun to come home every day and see how far the work had progressed rather than lament that none had been done. Whenever we wanted anything changed or fixed, it was done the next day without delay or excuse. When the project was finished, it was everything Josh had promised it would be and more.

Quality does not come cheap, but Josh’s prices were fair and he helped us invest wisely. He let us know when we had an idea that would not work well, and gave us some cost-saving options that would not diminish the finished look of the project. He was smart and flexible enough to make small changes as the project progressed in order to make it look and function optimally, at no added expense (unless we added something). As a result, the plantings, the deck, the patio and the lighting are stunning. Josh clearly loves his work and takes great pride in doing an outstanding job.”